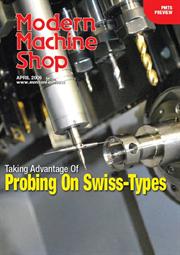 Following a visit to Renishaw's Stonehouse factory in October 2008 by Peter Zelinski, Senior Editor of the internationally respected Modern Machine Shop magazine, it was decided that an article would be written about Renishaw's novel use of its own touch probes on Swiss-type lathes. In April 2009 this article, written by Derek Korn another Senior Editor, featured on the magazine's front cover under the title 'Taking Advantage of Probing On Swiss-Types'.

The article below has been reproduced with the kind permission of Gardner Publications, Inc.

(The view to the right of the Stonehouse facility shows a line of Citizen lathes - the interior of this building, which is remarkably clean and bright, creates a good environment for machines as well as for personnel).

On-machine probing has been a vital part of Renishaw’s approach to setup reduction and process control for some time. It is one of a handful of techniques that comprise the UK-based company’s RAMTIC parts-production concept. RAMTIC, which is an acronym for the Renishaw Automated Milling, Turning and Inspection Center, was developed in the early 1990s as a solution for effective process control during the unattended production of small, prismatic parts. The proven concept is still being applied to produce various components for the company’s metrology products in its remarkably clean Stonehouse manufacturing facility located in Gloucestershire, England.

Through the use of standardized work fixtures and mobile carousels, master workpiece artifacts, and on-machine probing routines, RAMTIC enables conventional VMCs to maintain firm control of precision machining processes on their own. Recently, though, the company has developed similar approaches to allow its more complex turn-mill machines and Swiss-type lathes to achieve the same types of results.

Paul Maxted (right) is one of Renishaw’s principal manufacturing engineers at Stonehouse. He recently revealed how the company applies probing to reduce setup time and maintain accuracy of critical components produced on those multifunctional machines, which it hopes will allow batch sizes to be reduced where required to be more in line with product assembly requirements.

Before describing how probing is being used on the company’s turn-mills and Swiss-types, it’s helpful to briefly explain some RAMTIC fundamentals. Renishaw initiated RAMTIC as an automated method of producing prismatic parts on relatively low-cost VMCs. Each machine uses a fixture base having a standard dovetail interface that positions fixtures that hold multiple small workpieces. A trunion table provides rotation that allows the machine to access multiple faces of the various workpieces. A mobile carousel located at each machine holds as many as 50 fixture plates containing the raw material needed to produce “kits” of components for a product. The carousel also includes all the tooling the machine needs for a job. A transfer system automatically loads/unloads the fixture plates from the carousel and delivers them to the machine.

Touch probes perform pre-machining alignment checks. In addition, toolsetting probes verify that each toolchanger position possesses the correct tool, and measure tool lengths and diameters to determine offsets. The VMC then completely machines the first part of the batch, which is followed by a probing routine.

Rather than immediately probing the machined part, however, the probe first measures an artefact located within the machining environment. The qualified artefact is made of the same material as the part so both have identical thermal expansion characteristics. It is either a replica of the workpiece or a general unit containing various machined features. The machined part is then probed and the results are compared to the measured artefact. Process parameters are automatically adjusted based on the deviation between the artefact and workpiece measurements, and machining of the remaining workpieces begins.

Because setups are performed without manual intervention, the machines can run very small batch sizes (typically 10 to 20 pieces). While the machine is running a job, another carousel can be kitted with fixture plates containing the material and tools required for the next job. Upon job completion, an employee simply swaps carousels and starts the new part run.

In 2005, the company looked to achieve similar process benefits for its turn-mills commonly used to machine larger components. That paved the way for the development of a probing solution for Swiss-type lathes that is said to possess a level of inspection sophistication that previously hadn’t been realized on Swiss-types.

While the RAMTIC system continues to be applied in the production of the company’s prismatic parts, turn-mill machines and Swiss-type lathes are being increasingly used to produce parts that have both turned and milled features. That prompted the company to develop a probing strategy for its Mori Seiki SL 153Y turn-mills that are equipped with barfeeders and gantry loaders to allow extended stretches of unattended operation. The advantage of these machines is that they offer capability to completely machine a part in one hit. The downside is that the combined turning, milling and drilling operations can make setups tricky and time consuming.

Previously, the company would dial-in a new job on these machines by setting up the machine in a traditional manner and producing an initial part. The completed part would be delivered to a CMM that measured its key features. The machine setup person would then compare the CMM’s findings with the workpiece’s expected dimensions and determine how best to adjust machining parameters to bring the process under control. During complex set-ups, occasional incorrect decisions made in this effort greatly extend the time to tune the process. And when setup times are long, batch sizes can often be increased to justify the machine downtime.

The company now uses on-machine probing to automate and speed setups of these complex machining jobs. The process strays from the RAMTIC approach in that a part is not machined complete and then measured against a qualified artefact. Instead, a measurement is performed after each feature of an initial part is machined. All necessary process adjustments are instantaneously made before the next feature is cut.

This feature-by-feature setup measurement process continues until the part is completed. At that point the process is considered optimized and the probing cycle switches into process-control mode. The feature-measurement routine then is performed after every 40 to 50 parts (depending on tolerance trying to achieve) to compensate for any process deviation.

The software developed to update machining parameters also compares measurements against process rules Renishaw engineers establish for each job. These rules ensure that an anomaly doesn’t cause the software to automatically update a process based on incorrect measurements. Consider the worst-case-scenario in which a nest of chips collects around a part during a turning operation. The tangled chips would cause a probe used to trigger before actually touching the external feature. Without adequate intelligence built into the software, the software would automatically update the process based on an incorrect measurement.

(Because components produced on turn-mills and Swiss-type lathes can resemble prismatic parts, engineers must determine the optimal machine platform that should be used in each case. Renishaw has developed an in-house software application shown above that suggests a machine platform based on geometry information provided by engineers.)

History demonstrates that once a machining process is initially optimized on these machines, there will not be a significant discrepancy between a machined feature and its expected size. In fact, Renishaw’s expected variance often doesn’t exceed 0.004 inch. If a measurement value was to fall outside the software’s defined variance as in the case of the chip nest, the system assumes there is a problem and the machine is instructed to run the tool around the profile to remove any chips before re-measuring. If the variance returns to the expected range, then the software will alter process parameters as needed per the true measurement.

On-machine probing has most recently been integrated in a handful of the company’s Swiss-type lathes. Like the turn-mills, these machines can produce intricate components complete, but setups can be a bear. This causes not only production delays, but can also necessitate larger-than-desired batch sizes to justify the long setup time. That meant at times some components were machined even though they weren’t immediately needed. 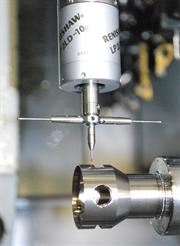 Originally new jobs on the Swiss-types were dialed-in similarly to the original turn-mill process. After setup, an initial part would be machined and taken to a CMM for measurement. The machine operator would then interpret the measurement results and decide how to adjust the process parameters to bring the part into specification. It wasn’t uncommon for new jobs on the Swiss-types to require five to ten process-adjustment iterations to optimize the process. This exercise often took several hours, although there were some instances in which it consumed entire 8-hour shifts.

The company’s initial effort to reduce setup time on these machines was to use standard tooling packages to eliminate the need to break down all tools after a job is completed and rebuild the machine from scratch for the next job. However, the company realized that on-machine probing was needed to achieve the fast, automated setups it needed for its Swiss-types.

(The touch probe pictured installs on the platen of a Swiss-type lathe so both X- and Y-axis movement is possible. That motion combined with the probe's three styli allows access to features of parts located on both the main and secondary spindles.)

Integrating probing on Swiss-types is challenging because there are often times when various operations are being performed simultaneously. There also is limited space within the work zone of Swiss-types to accommodate a probe. The company’s M32 machines from Marubeni Citizen-Cincom were selected to be fitted with the on-machine probing system. Renishaw uses its LP2 LD low-force touch probe that mounts on the machine’s main platen to allow both X- and Y-axis travel around a part. If the probe was mounted in the turret of these machines, then only X-axis travel would be possible (the turret doesn’t offer Y-axis movement). This would make it impossible to measure part features such as the center point of a hole. The goal for this probing system was to provide the ability to measure all machined features on Swiss-types.

The probe doesn’t consume a tooling station because it piggy-backs onto the main platen via a custom mounting bracket. This is important because many of the complex, multiple-operation jobs require tools in every station. The stylus configuration was designed specifically for use on Swiss-types, allowing a single probe to measure multiple features produced on either the main spindle or the secondary spindle.

The stylus pointing to the right shown in the photo above is used to measure features machined on the machine’s main spindle. It can perform internal and external probing for IDs and ODs in addition to flats, holes and chamfers machined into the face of a part. The downward-pointing stylus can measure cross-worked features and the width and diameter of grooves. The stylus pointing to the left is used to measure milled, drilled and turned features on parts loaded in the machine’s secondary spindle.

During setup, the probe measures each feature after it is machined and the system’s software automatically updates tool offsets.

Renishaw began running production parts using this probing technique during the middle of 2008 and are currently implementing across eight M32 machines. Early indications of set time reductions of around 50% will be achieved following implementation of the process on the top ten most complex components. Although this probing system currently is being used only at Stonehouse, Marubeni Citizen-Cincom plans to offer a similar probing package as an option on its Swiss-type lathes.

Find out more about Renishaw's range of touch probes and laser probes for machine tools.

The following items are recommended by Modern Machine Shop and can be found on its web site at mmsonline:

Under Control
Tom Beard's 1999 review of RAMTIC technology clearly reveals the extraordinary level of process engineering represented by this development.

RAMTIC still ticking
Mark Albert, Editor-in-Chief, visited the Stonehouse machine shop in 2007 and described how Renishaw's innovative approach to process control had been enhanced within its new facility