Refractory epilepsy is clinically determined by response to anti-epileptic medications, age at onset, and seizure frequency, and can severely affect quality of life, with a significant effect on neuronal development1. Failure to successfully manage epileptic episodes in children can severely impact not only the social development of the child but also the wellbeing of their support network2. The additional time and resources required to manage the long-term programme for paediatric patients with such complex needs results in additional pressures on healthcare workers from clinicians and neurosurgeons through to hospital managers. These increase the need for earlier, more targeted interventions.

The route to seizure freedom

Surgical resection offers an alternative approach that can provide better seizure control or ultimately, lead to seizure freedom in a subset of focal epilepsy patients that are typically refractory to standard pharmacological treatment.

Accurately identifying the epileptogenic zones is critical to the success of resection procedures. 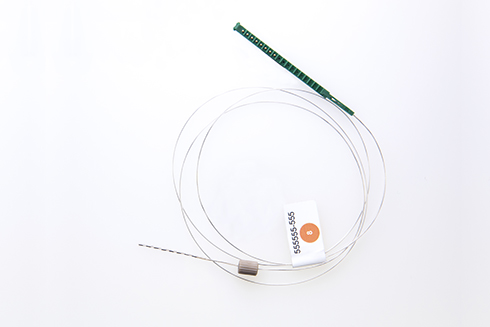 The success of SEEG in investigative and therapeutic procedures is increasingly influenced by innovative robotic technologies and depth electrodes.

Electrodes such as MICRODEEP® by DIXI medical, allow for deep, active bilateral exploration of the brain; with depths ranging from 16 mm to 80.5 mm, they can reach areas that are normally inaccessible during IEEG. In addition, the electrodes can be used to disorganise the epileptogenic zone, offering an alternative treatment route for children ineligible for surgery.

The use of depth electrodes during SEEG has expanded the repertoire of tools for diagnosing and treating refractory seizures in children with considerable success in several areas:

Seizures originating in the I/O cortex can manifest heterogeneously as well as share characteristics with seizures originating in other lobes. Consequently, detecting and recording seizures that originate from the I/O cortex can be challenging. Without accurate recognition of the epileptogenic zone, in particular those that originate deep in the brain, the risk of a poor outcome is greatly increased. However, using the minimally-invasive SEEG with depth electrodes, clinicians have successfully identified that in around 64 per cent of SEEG cases, seizures originate in the I/O.

One of the simplest approaches for investigating and delineating the epileptogenic zones is to map the activation level, as evidenced by changes in gamma activity, of each IEEG contact. Using SEEG and depth electrodes, variations in neural activity during a seizure can be quantified allowing for more accurate micro-resection.

In addition to identifying areas for surgical resection, depth electrodes can also be used in the treatment of refractory seizures. Creating small focal lesions that disrupt the epileptogenic zone using radiofrequency thermocoagulation (RFTC) has been shown to reduce seizure frequency and, in some cases, lead to complete seizure freedom. According to a particular study7, of patients not eligible for surgical resection, three (13.6%) were seizure-free and six (27.3%) were significantly improved after radiofrequency thermocoagulation.

The benefits of this approach are that depth electrodes are directly targeted to the epileptogenic zone and RFTC is applied during the SEEG procedure thereby eliminating the need for repeat procedures.

Identifying epileptogenic zones in children with refractory epilepsy has its challenges, with many of the methods requiring invasive procedures that increase intra- and post-operative complications.

SEEG offers a minimally invasive approach that can be successfully harnessed in the identification and treatment of paediatric refractory seizures, thanks to the effective placement of intracranial DIXI depth electrodes.

Want to find out more?